Cantor Dust began around the turn of the century as pianist Mark Klassen began the task of writing and self-recording songs in a basement apartment in Winnipeg, MB, Canada. After much exploration, he embarked on the dream-like journey of creating albums spanning from primarily instrumental orchestrations to narrative concept albums outlining tales of otherworldly natures.  In 2003, he released his first album Swallowed By The Night, a solo journey through darkened dreams and falling poppy petals. 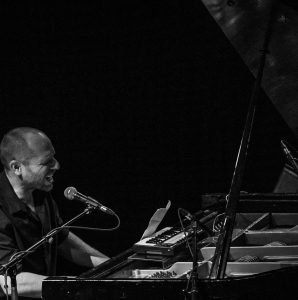 For the live performances of Safaris I’ve Been On (2011), Cantor Dust united with a group of musicians consisting of percussion, cello, and trumpet. Safaris… offers a compendium of adventures through time and space, transporting the listener through magical landscapes of two-stepping mountains and interdimensional seas, filled with all sorts of creatures of whimsy and wonder. Safaris I’ve Been On served as a story-telling children’s album for the imaginative adult audience.

In 2015, Cantor Dust released its first recording to rely heavily upon other musicians in the studio. I Can’t Find My Cape is a pop-rock infused album of eternal dynamics, bewilderment, and fear. The piano and synth-based compositions are driven by elegant drums, textured guitars, and towering vocals to deliver a powerful message of the ineptitude of the world’s epic heroes’ to carry us safely from the apocalypse..

The 2020 iteration of Cantor Dust pairs Klassen with multi-genre cellist Natanielle Felicitas, as the band now finds itself exploring new reaches of space in the creation of its upcoming album.